Unfortunately the messages sent via the contact form are only sent to a part of the team members while the email to the rest does not arrive.

Everything was tested several times in all directions and therefore it must be the contact form and because we are not getting anywhere, we need help at this point please.

To understand the problem, all team members were first removed. After also the invitation links had not arrived. So we checked the email server and there was no error.

In the course of this I have in the contact form:

This is the project:
https://anymod.com/projects/87M4M7/dashboard

Thank you for asking, and welcome to the forum!

In order for a user to receive form emails, they must have confirmed their email address by clicking on the link they were sent. Otherwise it would be possible to spam people with the forms.

It looks like several users in your project do not have confirmed email addresses, so please try confirming those and let us know if that doesn’t fix the issue.

On the YACHT-Project TWO recipients yesterday received a form-response.
As can be seen in the screenshot below, We expected THREE recipients to receive an email.

Does Tyler technically have the opportunity to check if the emailadress yacht@skysails.de has already been confirmed successfully? I feel the first step to take would be to somehow confirm the emailadress is running a confirmed AnyMod-Account. May I ask the AnyMod-Core-Team to confirm the AnyMod-Account for the following email-adress is valid and active? --> anymod Account for: yacht@skysails.de ? You may take a glimpse into the Team-Page here: Team Yacht Project . If required, we would gladly add Tyler to the team!

And I would love to get the same question (about the active AnyMod-membership) answered for internetanfragen@skysails.de and liny.limbara@skysails.de , both are assigned in the project Team here: Group-Project-Team

I had the following additional thought this morning:

After any new teammember is added to the project, the admin (or even all members) might receive an email: That Email would confirm the new member was successfully invited by email, but it would also let the Admin know the new member has in fact not yet confirmed, and the invitation is still in need of confirmation’.
Also, most importantly, IF the new teammember misses to confirm within three work-days, the system might forward another email to let everybody know the new team-member is still pending.

Last but not least I would like to mention the biggest Pain Point SkySails seems to encounter, with regard to the AnyMod-CMS. It still seems to be this ticket from May 2019 Email-response Management. It would be great for project-Team-members to have the ability to mute the undesired Contact-form-emails they do not want to receive!

See Screenshot with two developers. Only one of them receives an email wehenever the websites’ contact-form is used: 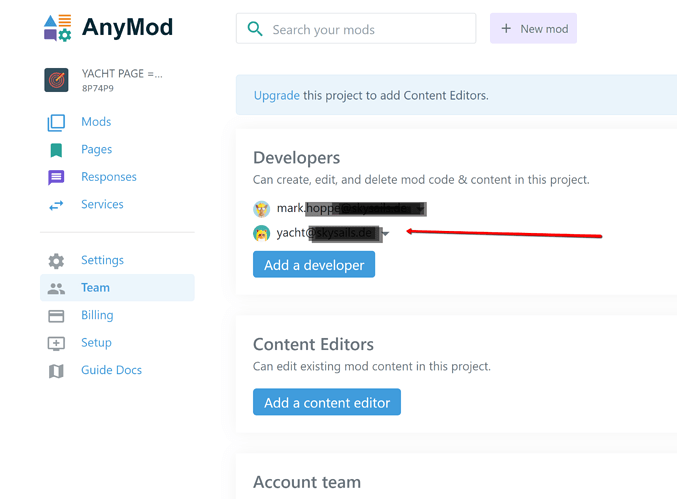 for now, please skip any further work on this ticket.
Most likely, the issue is on skysails side.

As it seems, skysails cannot find the invitation-Emails. And if the invitation-Mails are not confirmed, of cause the above issue will be the direct consequence.

I will need to ask skysails to search and find the invitation-email on their Servers.

I tested the invitation links on my end, and anymod forwarded an invitation email in no time successfully.

My assumption now is,
that SkySails might find the invitation-emails somewhere in their spam folders, or the like.

For now, you can pause to invest time into this ticket.

First issue:
Liny.limbara@skysails.de did not receive any invitation Email.
We may set this “issue” about the missing invitation-email aside.
It is not 100% clear if this issue is anymod-based, or if this issue is on the emailserver-side with skysails. All Invitation-Emails come from yourfriends@anymod.com.
I received those emails in my Test-Scenario, but SkySails claims they dont. Let us put this issue aside, as there is a more relevant second issue to investigate :

Second issue:
There is a finding, which evidently suggests
anymod does not forward emails to all recipients nessesary.
This happens, even though those recipients do run an active and confirmed anymod account:
AND those recipients are successfully added as a developer-member inside of the team list for that project.

The result is that for the Yacht Project
https://anymod.com/projects/8P74P9/team
Liny is a Team Member with her account liny.limbara@skysails.de
AND we tested if she is able to log in to the anymod.com page with her email and password.
She did ask for a new password link and that email did arrive in her inbox in no time.
So she was able to log into her anymod-account successfully.
Afterwards I filled in a form response via the corresponding website www.skysails-yacht.com and pushed the send button.
Two developer-members of the yacht project team did receive the email.
One further developer-members of the same yacht project team did not receive the email:
The contactform-Email was adressed from notify@anymod.com TO stefan.brueck@ and to mark.hoppe@ but NOT TO liny.limbara@ . She was NOT IN the list inside of the TO -Adress-Field inside of the email forwarded to stefan and mark.

She should. She is an active assigned member of the Project team just as well as the other two members I can see no reason why she does not receive emails. This issue occurres on several projects.

The longer I think about it, the stronger I feel this issue might have to do something with the fact the AnyMod Server Cache seems to no longer adapt to changes in a timely manner. More likely than not, I am mistaken. More likely than not my assumption is wrong. But I wanted to mention my though.

Anyway. I need to ask anymod to please look into this issue now.

We did extensive testing up until now.

If anymod has further questions, We will be glad to provide further information or run further tests.

The one who did not receive an emails was liny.limbara@skysails.de.
She should have received an email as she runs an active account AND is a developer-member of the project-team.

Hi Stefan,
We’ve identified an issue where the user email address is not being marked as confirmed in certain situations, and this is likely what is causing them not to be included on the emails.

I’ve manually marked the email addresses at the skysails domain as being confirmed, which should fix this issue. Please let me know if there are any other email addresses, and we will fix the underlying issue in the meantime.

Thank you for the write up!
Tyler

I just filled out the contact form yet another time and can confirm this issue is resolved. Thank you for manually confirming the missing team members to our project. As soon as we identify further team member who feel as though they might be ‘actually non confirmed’ I will forward those to you and ask you to manually confirm them. Have a nice start into the day!

on https://anymod.com/projects/837232/team
the below email suffers the same issue:
info@novaconsonanza.de
It might need manual activation as well

Yes you are correct, and we’ve updated that one. We’ll have this issue fixed shortly!

we will fix the underlying issue in the meantime.

Is the underlying issue fixed by now?

This is really something I am waiting for very much. My goal is to delete members from their dev role. But I am not able to do so, for as long as your fix is not out. Because I need to be 100% sure all invitation emails are fowarded sucsessfully . I need to reinvite all those members as mere content editors and must be sure that my repeated invitation process will work flaweless.
Would of cause be best if no reinvitation was needed at all. .

I am waiting for the patch and will do as described above, directly rightaway after your fix is deployed.

Hi Stefan, have you tried changing them to content editors directly from the team section of your project? There is a drop-down to do that.

I was not aware you already implemented this new Functionality!

I happily established the change on the team-page for 5 projects today !!

I wrote the above lines too early, see below

It only worked on THREE OUT OF FIVE projects:

Grateful if you can look into the reason for the issue. 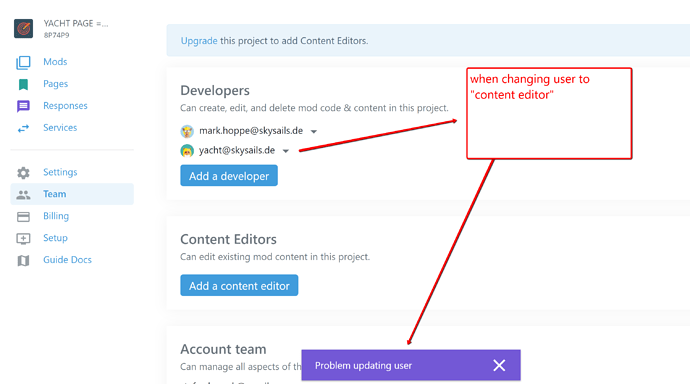 Once all users are migrated to the role of “Content-editors” --> I will start using the contact forms to write test-emails to ensure they are still forwarded.